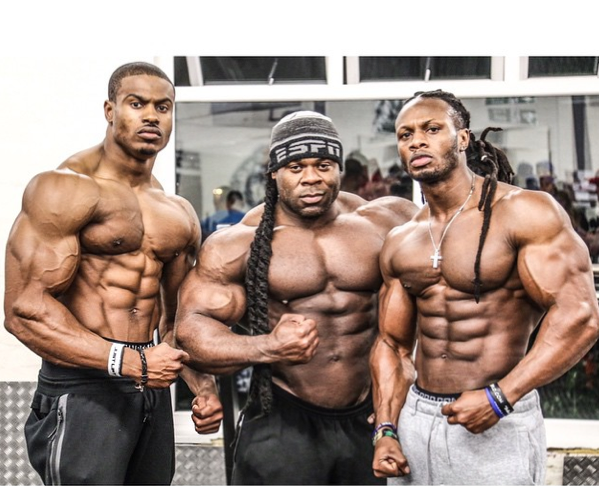 It seems that Kai Green has teamed up with Ulysses for one infernal training, which we cannot wait for. Kai published a new picture in style hanging in the gym with the master of the gyrus, Ulysses, promising the training of Mortal Kombat just in time for the forthcoming New York comics in 2015. Not only do these muscle monsters really scare us by that, but they also wear some bad ass  masks to really give us a warm introduction to the atmosphere of Halloween in October.

Kai Green spent his childhood and youth in New York. He was born in a troubled family and changed foster parents. To distract from the cruelty and gloom of the surrounding world, he went to “pull dumbbells.” Most of all, Kai dreamed of becoming an artist.

Excellent behavior for the future star of bodybuilding in the school did not differ and he was sent to sports competitions. “Knowing that I could surpass all peers and flaunt a beautiful figure, I went headlong into bodybuilding, and soon went beyond the usual framework and standards of athletes of my age. All this helped me to gain self-confidence and belief in the ability to compete successfully with other athletes, “Kai recalled. It is rumored that when God decided to create an ideal mesomorph, he made Kai Green.

It would seem that an athlete of this class lives in a luxurious mansion and goes to clubs or leads a fairly public way of life. However, Kai is a true ascetic. He lives in a tiny rented apartment in an area far from the most respectable quarter. Green,  in general, is a true ascetic. Neither the car nor the round bank account. All this mercantile fuss, says Green, distracts from the main thing. And the main thing is bodybuilding.

He began his serious studies in the basement gym 5th Avenue Gym in Brooklyn. He received professional status when he was not yet 19 and then began to win competitions, improving and reaching new heights.

“My two inner worlds eventually met and merged. I became an artist. I used my own body like a canvas, creating works of art that eventually became more and more detailed and complex,” Kai Greene explainedwhen asked about his conditioning. Yes, and he loves drawing, in his official Instagram a lot of drawings. Quite often he paints bodybuilders and even himself. Often his pencil reaches out to various ancient sketches of monsters, and Kai himself was nicknamed “Predator”.

In 1999, Kai Greene was invited to the amateur world championship in Bratislava. Learning that he finished fourth in the championship, Kai took a break in his career for four years. In 2004, Kai Green stated that he was returning to bodybuilding. At first he was unlucky, but in 2007, he was third at Keystone Pro and won Colorado Pro. In 2008, Kai became the third on the “Arnold Classic” and the first place was taken by Dexter Jackson (by the way, who won the tournament in 2015). In 2009 and 2010, Kai Green was the champion of Arnold Classic. With the largest and most prestigious bodybuilding tournament “Mr. Olympia”, Kay’s relationship is complicated. In 2009, he became the fourth (the first was Jay Cutler), in 2011 the third (after Jay Cutler and Phil Heath), and from 2012 to 2014 was the second.

Strength of the coach

Kai Greene missed “Mr. Olympia – 2008” for a reason; he had a hernia and it took a serious treatment. Kai did not know if he would be able to return and get in shape. It was at that crucial moment that he began to work with the legendary bodybuilding coach Charles Glass and at first they communicated only by phone.

Glass made adjustments to the Kay training program. Also, the following know-how was added: in bench presses, Kai began to apply a stop, that is, to hold the bar slightly after dropping it on the chest, and then squeezing it. Then Kai began to work with coach Oscar Arden, and later (from 2011) began to cooperate with George Farah. The latter has more than once prepared for top competitions top athletes, for example, Brenta Warren.

To the training process, Kai fits creatively. One of his training chips is that he constantly changes the training programs, improving them with the coach. Often, his training depends on the upcoming competition, and sometimes he does the exercises spontaneously. Kai approaches training not only as a necessary effort for the sake of physical fitness, but he tries to understand their spiritual depth.

Kai considers it necessary to use fast and slow muscle fibers in training. Thus, muscle mass grows, and all exercises are effective.

Kai’s power loads are often characterized by a small number of repetitions in a short amplitude, and the working approach is performed without muscle failure.

His back training program is considered one of the best in the world.

3. Traction vertical to the chest: 4 sets of 10 repetitions *

6. Dumbbell pull with one hand: 4 sets of 10 repetitions

Quite original, Kai Green is also suitable for leg training. He does a special exercise “Jefferson’s Thrust.” It is done this way: the athlete places the barbell between the legs, as if riding it, and from this position squats. What does Kai have as a result? Chic buttocks, which are judged by their merits.

Of course, everyone is also interested in its comprehensive program. As we have already noted, he constantly brings into it something new. The bodybuilder is often called the ideal mezamorph, the training program Kai Green is primarily suitable for people of this physique.

Now Kai prefers to train in the morning, although at the beginning of a career he often did it after lunch. 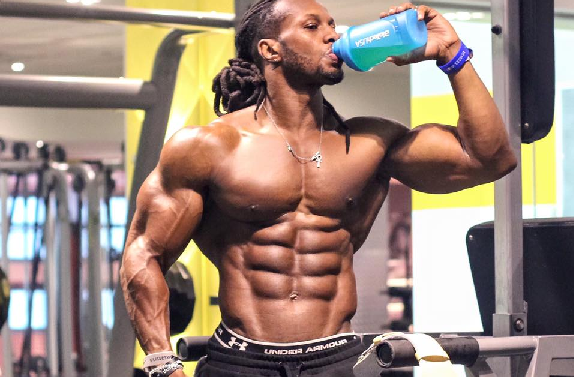